Talking to Myself Fifty 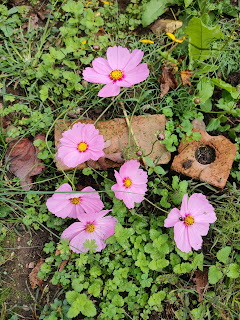 I used to be quite good at solving problems.

I learned not to waste time worrying, but

to begin the search for answers. When

I wake up at two in the morning and can’t

sleep, I make my breakfast and then sleep

again. It works. With people, I trust my

instincts. I had to learn to listen. I do

now. Those connections with others

demand I pay attention, imagine what

life is like for them. If I am mistreated

or manipulated, I let them go. The rewards

are great for trusting those other eyes

and what they see. It’s work, but I

garner rich rewards. My years have

brought more praise than I conceived

possible. I welcome those who choose

to listen and trust me. They people my

inside life and keep me learning from

everything that happens to me, body

or soul or both. I don’t know why people

love me, but it’s their love which holds

me up, opens doors, comforts my quiet

days alone, helps me forgive their

impatience and distractions. I can imagine

way beyond the outward persona

and recall the hungry soul.

Posted by Judy Hogan at 2:58 AM No comments:

Talking to Myself Forty-Nine 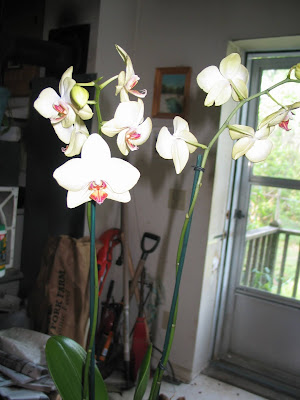 Orchids I had a few years ago near my back door.

Who wants to know the dark side

of our human nature? I haven’t

especially sought it out but decided

to teach Villon’s poetry, the Testament,

in particular, a moral treatise of the

He was hounded and hunted for

his knowledge, and he did break

a few laws and was exiled from

Paris as he was dying. He left

information behind him, forgave

his enemies and hoped for the

he wanted his Testament published,

and it was the underbelly of Paris

in sex and drink. He knew them all

and had sinned himself. His assumption

then, I would not have known those

prostitutes, would probably not have

imagined the trickery and debauchery

that existed behind the scenes of the

claimed a place in literary history

for his poetry. He comes after Dante,

who put so many of his fellow

citizens in hell and his beloved

showed where people failed the

moral behavior expected of them,

Villon is only a century before

surprised. He obviously had fun

with naming this dark side of French

history, and he must have made

some people love him else they

I believe he enjoyed every word he

those who misuse power and want

to rid themselves of their critics.

Posted by Judy Hogan at 2:21 AM No comments: 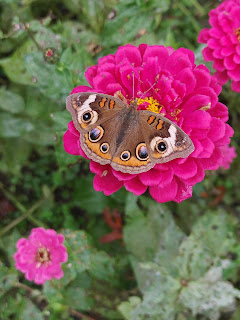 Photo of butterfly on zinnia in my garden by Janet Wyatt

Talking to Myself Forty-Eight November 15, 2020

The past is never the past, though

and yet certain days and years still

live inside us. We remember moments

of extreme happiness, watching out

the train window as we pass the

peasant houses, the fields in rain.

So deeply green the soft grasses,

of loss, and yet a new story, a

new understanding in a quiet

house, where I am fully at home,

yet guarded, protected from much

exertion. I proof my new book,

which takes me back a quarter

of a century or more. I’ve told

all my secrets, the loves that

sustained me, the friends who

cherished me then and still do,

as I cherish them. I am given

new ways to imagine even

my spirit’s gift, a kind of

opened my eyes and listened

to the secret words of my heart.

Nothing was lost. Everything

important to me is still here.

Posted by Judy Hogan at 3:46 AM No comments:

Talking to Myself Forty-Seven 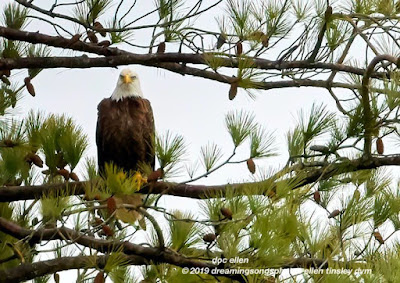 Talking to Myself Forty-Seven  November 8, 2020

For Joe Biden and Kamala Harris

Our next American president has a heart

big enough to love us all, very much

including those who voted against him.

He tells us, those on the ground and those

watching all over the world, that we are

words we learn as children: “with

liberty and justice for all” will come

true now. A white man and a black

their families, black and white, from

toddlers to the man who, at seventy-eight

will be our next president, onto the stage.

For those listening and watching, waving

flags, smiling and crying, they know they

are witnessing a new day, not only

in America, a land of “possibilities,”

but in our world, in time to fight climate

change, to kill the pandemic that is

killing us, to tackle systemic racism.

More people voted this time than ever

before: seventy-four million alone for

Biden. It took days to count all the

ballots. But they counted them. We

used our privilege–to vote.  Our voices

and our votes made it possible.

We can  once again believe in

that elusive liberty, that justice for all.

Posted by Judy Hogan at 3:27 AM No comments:

Talking to Myself Forty-Six 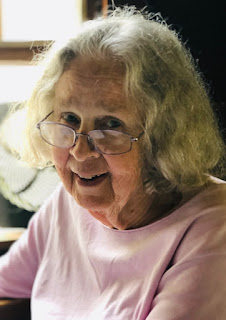 Photo of Judy at Lifestyle workshop by Elisabeth  2018

Talking to Myself Forty-Six November 1, 2020

“Nature for me--fire, water, wind, stones, plants, animals–all these are parts of a broken single being. And man in nature is the mind of a great being accumulating strength in order to gather all of nature into a unity.”–Mikhail Prishvin.

You find me in Russian literature. Not

too surprising. Have I not loved your poets

and story tellers from my youth? Dostoevsky,

I wait in the hour when the time changes

back from two in the morning to one, and

the dogs, restless in their sleep, yelp and

cough, then grow quiet. I wanted to be four

things: my own archetype: Shakespeare’s

Sister as Virginia Woolf envisioned her;

then partner, a Penelope to an Odysseus,

but also an Odysseus myself. Then healer.

Sometimes people yielded me the power

to touch and reassure them. Others fled

my love. But one remained. I wanted to be

a master of my art, and it was in your city

of Kostroma that I found my way and that

by loving all the people who let me into

their souls and even some who tried to keep

me out. Now you call me a master. In these

years of my aging, it’s hard to believe. Yet

then, in that quiet, borrowed apartment, I

felt my mind giving me all it had. Words

came easily. So many losses around me and

unhappy people, and yet I flourished. I

was happy. People loved me for myself.

I was a stranger, but treated like kin. Your

me a mustard plaster. You found my

to be with myself by myself, to create,

to love, to do what only I could do. The

Posted by Judy Hogan at 3:24 AM No comments:

Talking to Myself Forty-Five 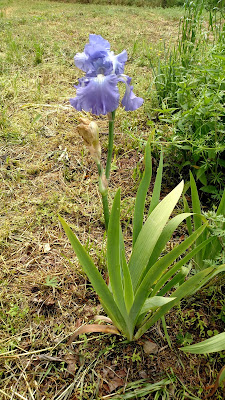 Blue iris in Judy's garden a few years ago.

And what is love? Long ago St. Paul

told us what we needed to know.

“Love is patient, love is kind. It does

not envy; it does not boast. It is not

proud. It does not dishonor others.

It is not self-seeking; it is not easily

angered. It keeps no record of wrongs.

Love does not delight in evil but

rejoices with the truth. It always

the greatest of these is love.”*  He

speaks of love. Finally, I hear him

and believe him. He loves me. Our

age is a difficult age. It is hard to

hope, hard to believe even in love,

and yet it arrives, despite all the

illness, the deaths, the terrible

fear of losing everything. Then

we know we can be happy. We

will live; our words will last.

its roots under both our houses.

We are not forgotten. We are

safe. Even when we fall, we will

continue to be known and loved.

Posted by Judy Hogan at 4:04 AM No comments:

Talking to Myself Forty-Four 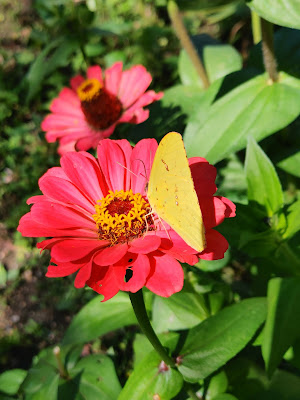 Two pink zinnias and a yellow butterfly by Janet

In my mind’s eye a zinnia garden

outside my back door. Tall, large,

showy circles of pure color atop

white, purple, even green. The frost

hovers and will kill them all. Not  yet!

Not yet! Janet dug out the roots of

found rich compost and dug that in,

scattered seeds and watched the

seedlings and the morning glory

weeds pop up. Brought me a photo

of the first bud, then bloom. Slowly

they gained height, branched to

make room for dozens of blooms.

We brought some in. She took

some for friends. She guarded

her treasures and made photos for

me, So many photos, sometimes

with a butterfly. I’ll never forget

my zinnia garden. Let the hard

Posted by Judy Hogan at 4:39 AM No comments: